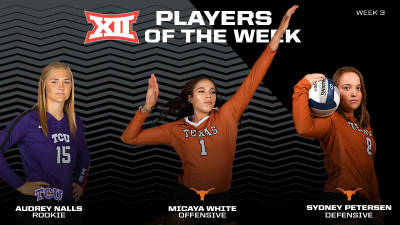 Longhorn teammate, Petersen, scooped up 39 digs in just seven sets to average 5.57, well above her season average of 4.22, to lead the league last week. Against No. 13 BYU, Petersen tallied 19 digs for 4.75/set, on top of her 20 digs in a three-set sweep of Wichita State for 6.67 digs/set. The sophomore led the Longhorns in digs in both matches last week.

Nalls finished with a career-high five total blocks in a sweep over Miami, while in TCU’s five-set thriller against Auburn, she once again led the team with 17 kills, her fourth 15+ kill match in her last six outings. The rookie continues to lead Big 12 freshmen in kills, kills/set, points and points/set this season.

This week’s awards mark the first all-time for Nalls and Petersen, while White earns her ninth overall award and third offensive honors.

2019 Volleyball Players of the Week