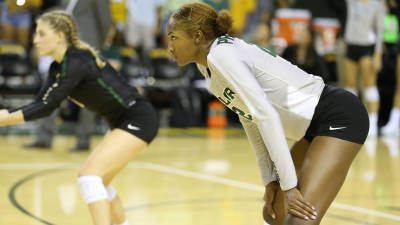 Pressley, who earned her 12th all-time Big 12 weekly award and her eighth offensive award for her performances last week, garnered the first national weekly honor for the Big 12 this season. Her national recognition marks the second of her career (Nov. 7, 2017), making Pressley the first Big 12 student-athlete to accomplish this feat since Haley Eckerman of Texas won the national award in 2012 and 2013.

The Cypress, Texas, native helped steer the Bears toward two top-10 upset road victories last week with 31 kills against No. 4 Wisconsin and 20 kills over No. 11 Marquette. The junior outside hitter recorded a league-leading 62 kills and 6.15 kills per set, including an errorless outing over the No. 11 Golden Eagles. Pressley surpassed 1,000 career kills against MU, sitting at 1,008 as a Bear.

With this week’s honors, a Big 12 volleyball student-athlete has won the award at least one week in each of the last 16 seasons.