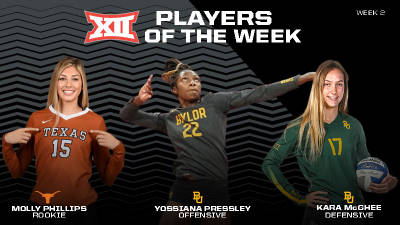 The Big 12 Conference announced week two awards for the 2019 Volleyball season as Baylor’s Kara McGhee and Yossiana Pressley, along with Molly Phillips of Texas, earned honors.

Pressley, the Big 12 Offensive Player of the Week, helped steer the Bears toward two top-10 upset road victories last week with 31 kills against No. 4 Wisconsin and 20 kills over No. 11 Marquette. The junior outside hitter recorded a league-leading 62 kills and 6.15 kills per set, including an errorless outing over the No. 11 Golden Eagles.

For the first time this season, a Big 12 program has taken two of the three awards as fellow Bears teammate, McGhee, garnered the Defensive Player of the Week award. McGhee helped shut down two ranked opponents, compiling six blocks in each of the matches. Her efforts against Marquette allowed BU to compile a season-high 14 blocks and hold the 11th-ranked team in the country to a .148 hitting effort, including -.026 in the first set.

Big 12 Rookie of the Week honoree, Phillips, put down five kills on a .500 hitting clip and averaged 1.00 blocks per set against No. 8 Minnesota. The rookie hammered a season-best 11 kills, hitting .450 in a five set thriller on the road at the No. 1 team in the nation, Stanford. On the week she averaged 2.00 kills per set for a league-leading .464 hitting clip.

This week’s honors mark the first all-time for the freshman duo of McGhee and Phillips. For Pressley, she earns her 12th all-time award, eighth all-time offensive award and first honors of the season.

2019 Volleyball Players of the Week