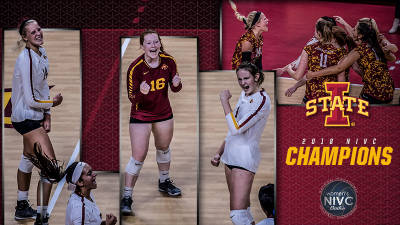 For the last two years, a Big 12 program has made it to the NIVC final, a feat that no other conference has done since the return of the tournament last season.

The Cyclones took down the Green Wave of Tulane in a three-set thrasher, capping off ISU’s season with a nine-match win streak. The Cyclones’ win-streak was tied for the second-best streak in the Big 12 this season.

Iowa State was led by NIVC All-Tournament Team MVP Jess Schaben, who posted 14 kills and 10 digs for her fifth straight double-double. Schaben closed out the tournament with an NIVC-record 99 total kills. Josie Herbst finished with 14 kills at .414 hitting and Eleanor Holthaus, another All-Tournament Team member, had 13 kills at .522 hitting.