AVCA Honors McCall as Player of the Week 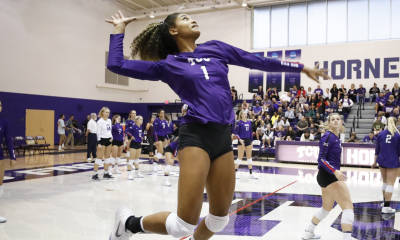 AVCA Honors McCall as Player of the Week

Freshman élan McCall of TCU was named the Sports Imports/AVCA Player of the Week.

McCall is the first recipient of the award in TCU’s history.

The Horned Frogs’ outside hitter was named Offensive Player of the Week and Rookie of the Week after her double-double performances last week. The five-time Rookie of the Week winner led the way for TCU,  as she put down 5.43 kills per set over both matches at a .516 hitting clip. She marked a career-high hitting percentage (.583) after a 22-kill/14-dig performance against WVU.

In the Horned Frogs’ three-set sweep over Kansas, McCall recorded her second double-double on the week on a 16-kill/16-dig outing with a .429 hitting clip.