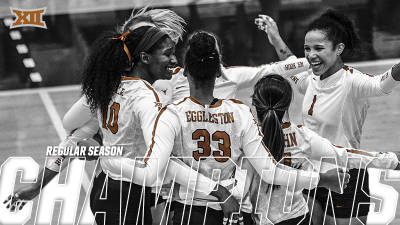 The Texas Longhorns were named the 2018 Big 12 Volleyball Conference champions after a 3-1 win over the Baylor Bears on Friday night. For the second year in a row, UT has brought home the Big 12 regular-season trophy, which marks the seventh title in the last eight years and the 11th overall.

As the Big 12 regular-season champion, an automatic bid to the 2018 NCAA Division I Women’s Volleyball Championship was earned. Currently, Texas ranks No. 5 in the AVCA Top 25 Coaches’ Poll and No. 4 in RPI.

The Big 12 regular season concludes on Saturday, November 24. The NCAA Volleyball Selection show will air on ESPNU on Sunday, November 25, at 7:30 p.m. CT.