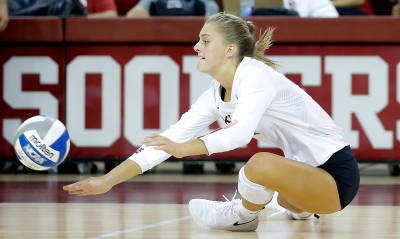 Oklahoma’s Kylee McLaughlin was named The Sports Imports/AVCA Player of the Week.

McLaughlin, who was named Big 12 Co-Offensive Player of the Week, led the Conference with 108 assists, the most in a week’s span during league play this season.

She set a career-high in assists with 62 against Texas Tech, matching the most by a Big 12 student-athlete in all matches this season and she led the match against TCU with 46 assists.

The Carrollton, Texas, native registered a double-double in both of OU’s matches this past week, 62 assists/14 digs vs. TTU; 46 assists/15 digs vs. TCU. The sophomore setter also added six kills, including four in an error-free performance vs. TCU as she registered eight block assists against TTU and two against TCU to total 10.

Currently, McLaughlin owns the third-best assists per set average in the Conference (10.70), which ranks 42nd in the nation, and she leads the league in overall assists (1,038).

This award marks the first national honors since Yossiana Pressley (Baylor) earned it a season ago, the 42nd for a Big 12 Conference student-athlete and the third for Oklahoma.