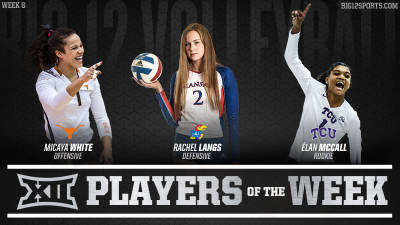 The Big 12 announced its weekly awards after the conclusion of the second week of conference play, a week which saw Micaya White (Texas), Rachel Langs (Kansas) and élan McCall (TCU) earn honors.

White, the Offensive Player of the Week, earned double-digit kills in both her matches on the weekend and registered a career-best in hitting with .588 in the win against Baylor. In that performance at BU, she tallied 10 kills on 17 swings without a single error as she landed one dig shy from the first triple-double in the Big 12 this season. The recognition was the ninth of her career.

Freshman middle blocker Langs was honored with her first career weekly award as she was named Defensive Player of the Week. She registered the second 14-block outing in the league this season, one block shy of the Big 12 record of 15 total blocks in a five-set match. The KU student-athlete recorded 11 of her 14 blocks in a two-set span and now leads the Conference in blocks (19) and blocks per set (2.11) in conference play.

For the fourth time this season, McCall was tabbed the Rookie of the Week after leading the league in kills per set (5.25) and points per set (5.50) for the second time. She totaled 21 kills and 13 digs in TCU’s solo match of the week for her eighth double-double of the season and fourth straight. Her 21 kills marked the fifth time this season in which she has reached the 20+ mark.