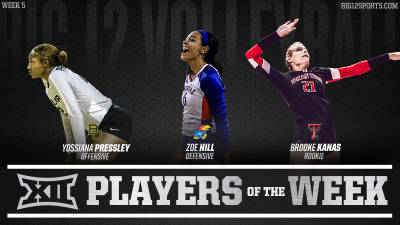 Pressley was named Offensive Player of the Week for the second time this season as she posted a program-best 39 kills against Iowa State in a five-set thriller, hitting .390 in the match. She landed one kill shy from matching the Big 12 record for kills in a match set in 1997. She led the league on the week in kills per set (6.11) and points per set (6.3).

Hill, the Defensive Player of the Week, totaled a combined 16.0 blocks, which attributed to 50 percent of KU’s 32.0 total blocks for the week. The junior middle blocker notched a league-best in blocks per set (2.00) after the first week of conference play concluded.

Kanas (Rookie of the Week) led Texas Tech in kills in both wins last week as she earned a season-high 17 kills on .344 hitting percentage with four blocks against No. 19 Baylor. She led Big 12 freshmen for the week in hitting percentage (.356) on 3.88 kills per set.