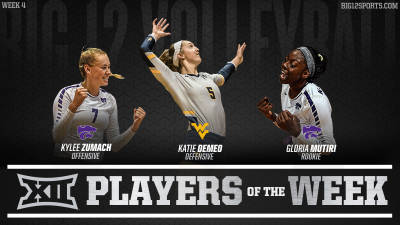 The winners of the Big 12 weekly awards for the final week of non-conference play were announced as Kylee Zumach (Kansas State), Katie DeMeo (West Virginia) and Gloria Mutiri (Kansas State) were selected.

The Offensive Player of the Week, Zumach, earned her second honor of the season as she set a career-high, hitting .513 in a four-set win over Green Bay with 20 kills without a single attacking error on 39 swings. In addition, she led the Big 12 in kills per set (4.86), hitting percentage (.463) and points per set (5.21).

DeMeo (Defensive Player of the Week) notched a double-double in a five-set victory over Morehead State with 10 kills and a career-high 12 total blocks. This marks the second time this season that a double-double in kills and blocks has been achieved. She recorded four solo blocks and 19 block assists for a total of 23 blocks on the weekend.

Mutiri (Rookie of the Week) hit .327 over the weekend while averaging 3.00 kills per set and 3.00 digs per set placing her in second and third, respectively, amongst all freshman. The honoree registered 12 kills in a sweep at UMKC and then a career-best 14 digs over Green Bay. Over the two matches she tallied five total blocks.

All-time, Zumach earned her seventh weekly honors, while both DeMeo and Mutiri received their first award.