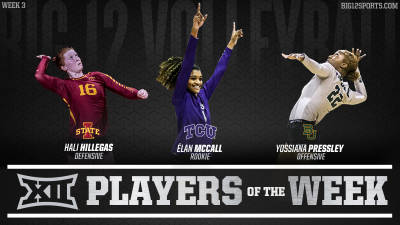 Pressley (Offensive Player of the Week) received her first honor of the season as she led the Big 12 in kills per set (5.85) and points per set (6.27) in a 2-1 weekend for the Bears. The sophomore recorded a conference season-high and career-high 32 kills with .313 hitting percentage against No. 2 Wisconsin to assist BU in its first top-two win in program history.

Hillegas (Defensive Player of the Week) led Iowa State in digs across all three matches. She dug for a weekend-high 30 digs vs. Wichita State (Sept. 8), which was the most digs by a player this week in the Big 12. Hillegas currently owns the only three 30-dig matches in the Conference this season and finished the week with a Big 12-best of 67 digs at 6.09 per set.

McCall (Rookie of the Week) continued her streak of double-digit kill matches as she now has 10 consecutive after a total of 56 kills were recorded over the weekend and 5.09 kills per set. The freshman recorded the first Big 12 20-20 double-double in a match this weekend after 25 kills and 22 digs in her performance against Louisiana (Sept. 7). This week’s award marks her third consecutive Rookie of the Week, which is only the fifth time in Big 12 history since the award was introduced in 2008.

This week marks the 10th all-time award for both Hillegas and Pressley and the third for McCall.