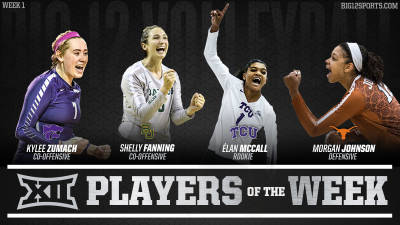 Fanning (co-offensive) ranked as the top attacker in the Big 12 as she notched double-digits kills in all three matches to average 3.73 kills per set. She also hit .559 on the weekend with only three errors.

Zumach (co-offensive) posted a Big 12-best 6.17 kills per set. She earned her first double-double of the year with 18 kills and 12 digs at Hawaii. Johnson (defensive) played a key role in Texas’ victories over two top-25 opponents. She recorded 11 total blocks against No. 7 Florida in a come-from-behind win on her way to 13 total over the weekend. McCall (freshman) averaged 4.54 kills in her first collegiate action. She hit double-digits in every match and registered her first career double-double with 21 kills and 14 digs vs. North Dakota.

This week’s honor marked the sixth all-time for Zumach and third for Fanning. Johnson picked up her third career award.