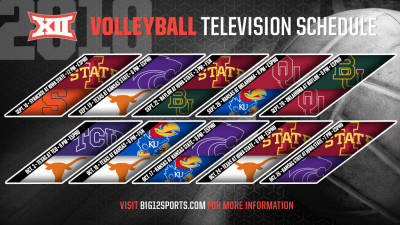 The Big 12 and its television partners, ESPN and FOX Sports, have announced the Conference telecast schedule for the
2018 volleyball season.

Of the 10 matches selected for television broadcast, ESPNU will host eight, while the other two are televised on FOX Sports Regional
Networks (FSN). The first match to be aired is the only non-conference outing included as Syracuse travels to Ames, Iowa to take on
Iowa State in a midday duel on September 16.

Conference coverage will open up with the preseason favorite Texas on the road against Kansas State at 6:00 p.m. CT on September 19
on ESPNU. The Longhorns went undefeated in league play a season ago and are one conference win away from 20 consecutive.

FOX Sports is set to air two matches that should be considered as marquee conference matchups as they feature the top four teams
in the Big 12 preseason poll. Baylor will travel to Iowa State on September 22 for a 3:00 p.m. CT Saturday showdown, while Kansas will
host Texas for a primetime, midweek match on October 10 at 8:00 p.m. CT.

All times listed are Central.