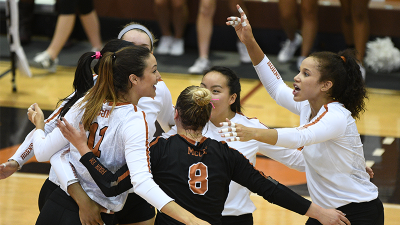 The Texas Longhorns were selected as the 2018 Big 12 Volleyball Preseason Champions, as voted on by league coaches. This marks the 11th occasion Texas has been picked as the No. 1 Big 12 team.

UT finished the 2017 season with a perfect 16-0 record in Big 12 play and a 27-3 overall record on its way to earning its sixth conference crown in the last seven years. With the preseason awards, Texas duo Micaya White and Logan Eggleston swept the Preseason Player and Freshman of the Year accolades, respectively.

Coaches were not allowed to vote for their own team.